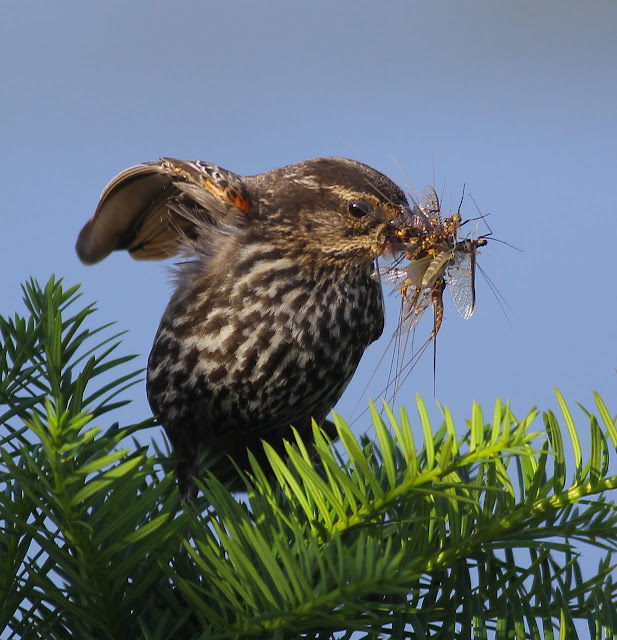 It's Fish fly season in Michigan! This flying insect that breeds at the bottom of our coastal lakes and rivers, the very thing you see Lady Red Winged blackbird gorging on, is an Old Testament style pestilence that comes forth from the deep in numbers incalculable. They adorn every window, side walk and lamp post within five miles of the water with their slippery, squirming bodies. For fun you can stealthily place a fat one on your friends ear. The fish fly will wait patiently until your victim feels the slight yet annoying probing of the bugs rear antennas. You will get a good laugh when your loved one shakes their head frantically and slaps at their ear. It's a harmless practical joke as the little guys do not sting or bite, this being their only but important virtue.
The life of a fish fly is compressed into a single day. Hatch-sex-and fly until you die pretty much sums up it's frivolous existance. Common afterlife advice recommends heading for the white light if you should see such a thing on your way out. Presumably it leads to greener pastures. Apparently fish fly culture suggests a similar rule. As the sun sets on their big day the flies rapturously fly off in the direction of any bright light and swirl about until they drop dead in stinking piles by the millions. Whoops, wrong white light!
Here's a artsy fartsy picture that almost makes the fish fly pestilence look pleasant and looking at it dispassionately I suppose our local curse is an avian windfall. 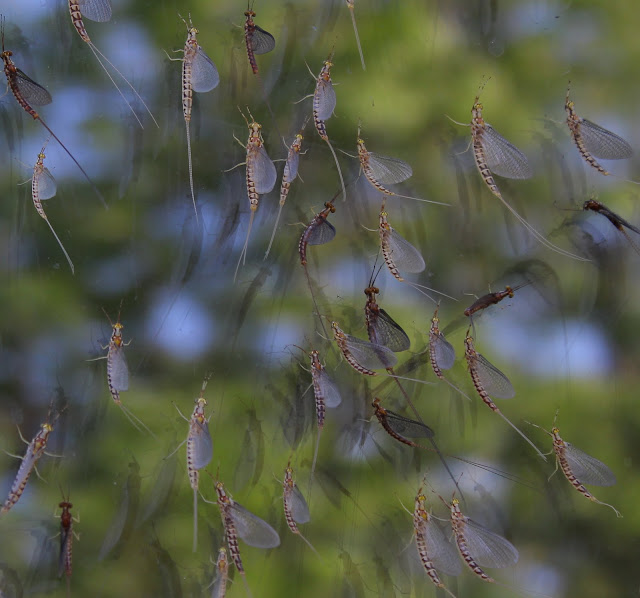 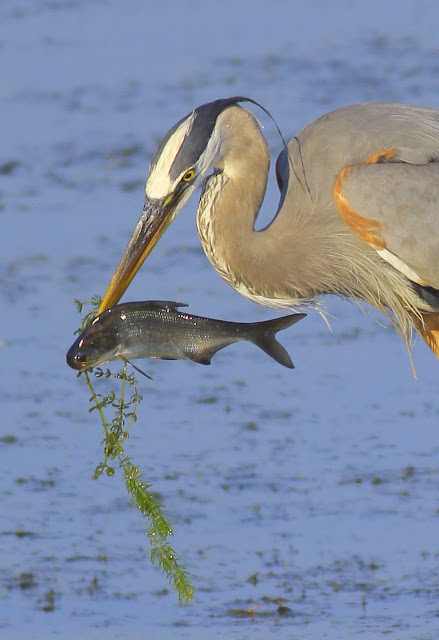 I was hanging out in Detroit at the end of last week doing the firefighting thing. Ours is a 24 hour shift that ends at 7:30 AM. It was a good time for my son Joshua and I to take a drive over to Belle Isle, enjoy the sights from the middle of the river, and shake off our long night of putting the wet stuff on the red stuff. Soon after crossing the MacArthur bridge that spans the mainland to the island we spotted a Great Blue heron looking to spear breakfast at the North end of the pond facing Scott fountain, a magnificent white marble monument bequeathed to Detroit by it's most scurrilous playboy prankster at his death in 1910. After a frivolous life spent chasing wild women, gambling, ceaselessly suing his many adversaries, and playing vindictive practical jokes with money inherited from his father, James Scott had few friends among the living. His enemies were legion. As the hard drinking socialites health failed he conceived a brilliant plan to foil his stuffy detractors one last time. Played from beyond the grave, even as he made for the white light, Scott's lawyers laid down his final trump card. 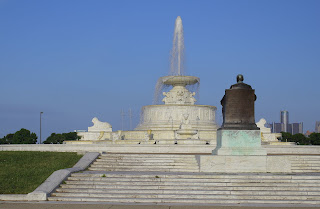 With no relative to contest his last wishes James left the good people of Detroit with an interesting moral dilemma. Scott willed half a million dollars to the city specifically for the erection of a grand fountain on the crown jewel of Detroit's river front, Belle Isle, with this stipulation; that a heroic life size statue of himself also be commissioned and positioned there to watch over the fountain and further pester his still living adversaries. A towering Washington Monument style Doric column had been proposed for the same prime spot now coveted by James Scott by certain well heeled citizens but those efforts had failed to find traction financially. That the self serving Scott, lounging now in the Great Beyond, might out maneuver them caused a fury of contempt. The pulpits, politicians, and halls of commerce rang with a single voice,"This contemptible man, whose life valued no more than a fish fly for the common good that it achieved, should not be honored in this folly of cosmic self-promotion. Let the money rot like fish flies in July!" 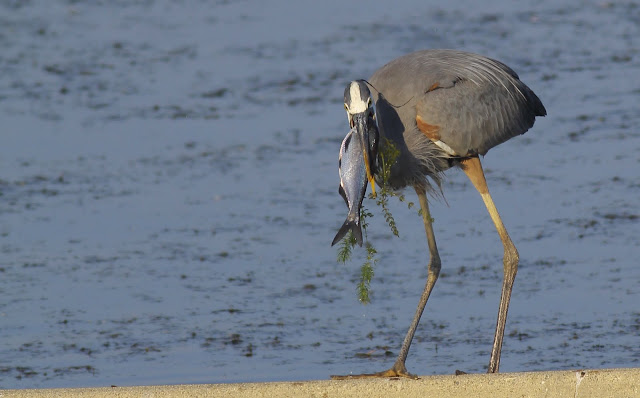 Letting Them Gag On Their Indignation 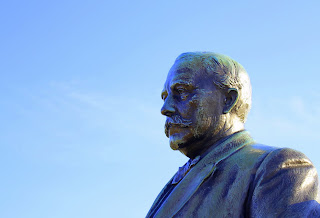 15 years after his death Scott's cynical point was made. As the funds increased in value the temptation could not be resisted any longer and the fountain, with a contented looking bronze sculpture of James Scott looking on, was commissioned and built. The Cass Gilbert designed fountain is impossibly beautifully. The 510 foot circumference of the lower basin cradles dozens of fanciful characters carved from impeccable white marble spewing jets of water. At night, when the fish flies are out of season, it is illuminated magnificently and can render one speechless with wonder.
100 years after Mr. Scott's demise this improbable monument envisioned by the vile practical joker, whose last act was to expose the frailty of his fellow citizens righteous indignation when faced with a fat stack of dirty money, still says a mouthful. 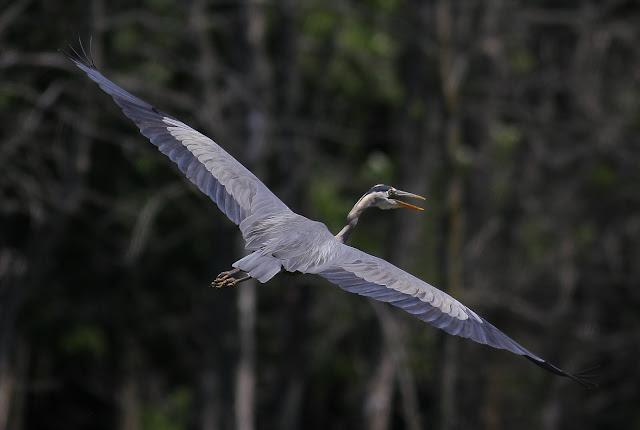 #1. Simply copy the above picture onto your W.B.W. blog entry. It contains a link for your readers to share in WBW. Or you can copy this link on to your blog page to share W.B.W. http://pineriverreview.blogspot.com/
#2. Come to The Pine River Review on Tuesday Noon EST North America through Wednesday midnight and submit your blog entry with Linky.


The idea of a meme is that you will visit each others blogs and perhaps leave a comment to encourage your compadres!


The thumbnails below are links to our contributors blogs. Click on them and view their beautiful posts.
Come on it's your turn!
Posted by Springman at 10:30 AM