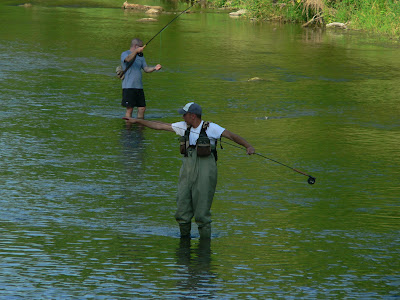 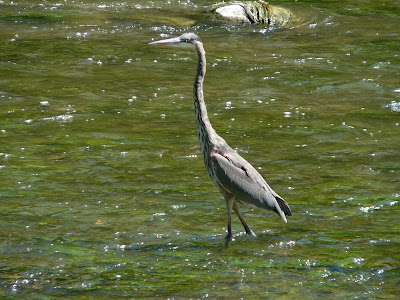 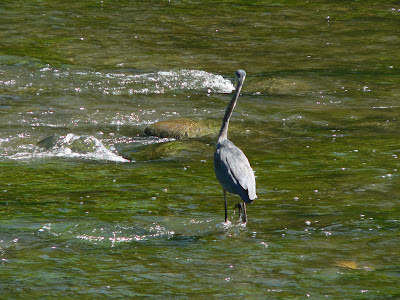 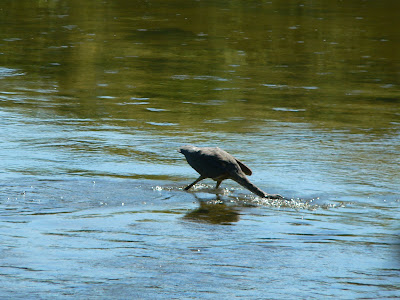 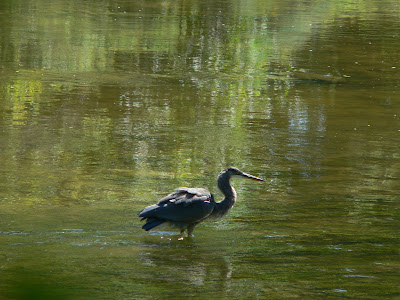 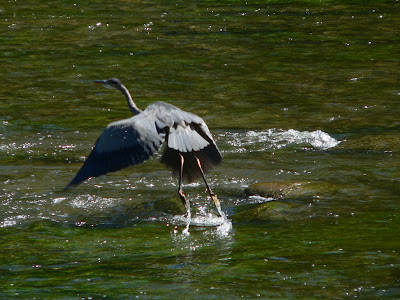 As the water level recedes during the dog days of summer the fish begin to collect in the deeper pools along the river banks. Fish dart back and forth through the shallows visiting these holes to take a break in the relative safety and calm of the deeper water. Such conditions see the return of the local fly fishermen who stalk the bass down by the bridge whipping there long poles forward and back. There are real professional fishermen out on the river too whose skills have been honed by the stark necessity of making a living and they are amazing to watch. The Bald Eagle, Osprey, Great Blue Heron, and Belted Kingfisher all ply their trade along the river bends. Each approachs the act of snaring fish differently. The eagles make dramatic dives as they cruise high above the ribbon of water yanking out their stunned prey with wicked talons. If a medieval execution is more your style you might prefer the Belted kingfishers fishing technique. These blue jay sized fliers make a distinctive machine gun racket as they dart along the river before perching on dead tree limbs along the Rio Pine. From these observation posts Kingfishers ready their stiletto beaks for a mad dive into the deep to stab their targets. Often they will fly with their prey to a near by rock and beat the life out of it against the granite. One's human sensibilities are rattled by such high spirited savagery. Nature seldom pulls its punches.
For my entertainment I prefer the Blue Herons easy going style. The herons flying profile reminds me of the prehistoric pterodactyl. We see its long stick thin legs trailing behind the huge slowly pulsating wings with that crooked neck and long bill out front blaring a raucous call. And the damn thing is decked out from top to bottom in gun metal blue feathers! A preposterous beast indeed.This bird is not designed to plunge from the heavens full throttle like some living dart. No, the Blue Herons approach is meditative in spirit. This bird lands near the shallows and little rapids where it begins its methodical gate, raising its skinny leg at the joint and ever so slowly planting it down again as it leans its body into the current. Once satisfied with it positioning the great blue predator waits for opportunity then whack! It uncoils that ungainly neck toward the water propelling its beak downward. When the head emerges, its neck feathers a ruffled mess, there is generally a small fish in its beak that is swallowed down sushi style.
Onward, slowly and carefully the heron makes its way past my door a shy and regal neighbor.
Posted by Springman at 10:29 PM 1 comment: 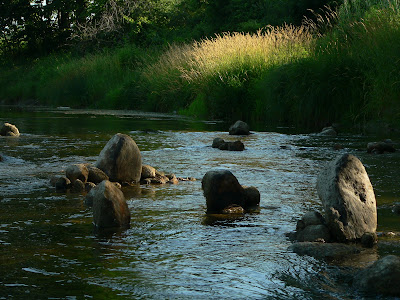 The Rio Pine takes an elevation drop behind my house creating a gentle rapids. The sound of water tumbling and whooshing through the rocks is what I call RiverMusic. RiverMusic is just one part of an emerging art form WeWhoCare have nurtured here at our home along the river. As I recall, RiverMusic sprang out from our experiments in RiverSculpture back in the early years. There are large boulders that stick up from the river bed when the water is low during the summer months and we have fun pushing them up on their edges creating fanciful seascapes that also change the timbre of the river as it cascades against and around the newly arranged obstacles. The careful placement of a few stones will change the sound of the clatter maybe adding a low rumble or a high splash and of course the new swirls and eddies lend visuals to the show. This is quite abstract of course but the results can be breathtaking. Is it an Art form? We do not intend to define Art, but this creative act is intentional and does express more than it elements would imply on their own. Wala, Art

Posted by Springman at 8:25 PM No comments: