Posted by Springman at 1:12 AM No comments: 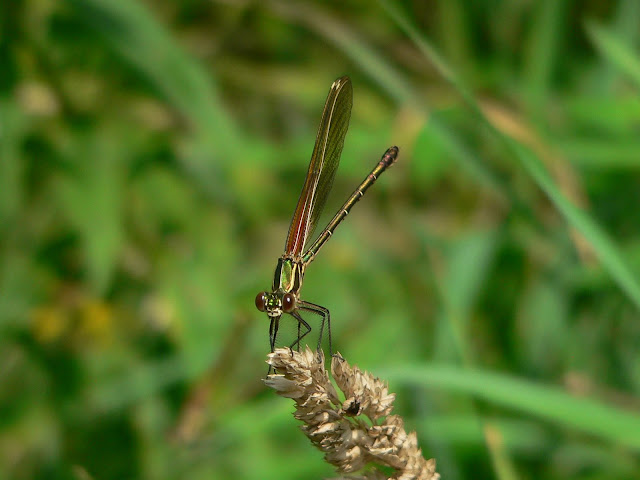 Hanging out along the banks of the Pine River watching the long grasses and wildflowers sway in Michigan's  late summer breezes we enjoy the sight of one of natures most elegantly designed and fiercest predators. The Damselflies dainty name, compared with its larger and sturdier relative the Dragonfly, celebrates its symmetry and color as opposed to its prowess as a legendary insect hunter. As humans, symmetry and interesting color schemes are bedrock elements in our concept of beauty. Damselflies bring these attributes in abundance. Nature loves a great diversity and with well over 2,000 known variations, the true hard core fan is hard pressed to choose a favorite color scheme. The fact that Damselflies don't annoy humans, like the pesky mosquitoes they often dine on, doesn't hurt their reputation either. In terms of their human appreciation quotient there is much to love here and envy it seems. Bluets, pictured resting on and above the water, illustrate the male using the grasping organ at the tenth segment of their tails to attach themselves to the back of their lady friends heads, the beginning of an estimated 6 hour mating ritual. Impressive.
It has also been noted in a study by the University of Antwerp in Belgium that certain male damselflies will seek out other males for sexual encounters when females of the species change their coloring to appear less attractive as potential mates. Curiously, Professors Hans Van Gossum's study even goes so far as to postulate that some males seem to prefer their own sex even when there is an abundance of females in the wild. One can only wonder how researchers got close enough to investigate this intriguing mystery. Click here to view National Geographics take on this story.
Even with six legs Nature did not afford the damselfly the ability to walk. Their spiny legs are excellent for perching on grasses and sticks and its nearly impossible for its prey to escape their clutches. Damselflies hold their four Tiffany wings upright and together at rest rather then spread out flat and separated like a Dragonfly and their orb like eyes, which incorporate over 30,000 facets, give this visionary bug the unimaginably complex sense of sight that guides their aerial assaults.
Damselflies earn our respect as one of Earths most enduring creatures. The fossil record indicating their existence predating the "fragile" dinosaur by 100 million years!
Posted by Springman at 9:41 AM No comments:

A Ride on the Rio Pine

The water level on the Pine River is high for late August. Suzanne and I took note, donned our straw sun hats and dragged the kayaks down to the rivers edge. The temperature was in the upper 80's as we pulled away from shore digging our paddles in to cut our way upstream. We had just enough muscle and just enough water to plough through the shallow bends beyond the Pine River Bridge. There lays the deep wide river and things became much easier. Our strategy dictated that we should paddle upstream until our hands started to feel raw or our arms gave out. Old age kicked in about where Homer Cemetery borders the Pine River Road and so we gave up our efforts and let Mother Nature slowly spin us back home again in her loving currents. Floating back downstream Suz and I made much less of a ruckus without the splish splash and the creatures of the river showed themselves. An adult Bald Eagle has been feeding on the Pine and the Chippewa rivers. Take a look at the video to see if we were lucky enough to get a glimpse of his majesty.


I dug out the acoustic guitar and put together this piece for your listening and viewing pleasure! After the video starts be sure to kick up Utube's resolution from 360p to 720p to take advantage of the HD video.
Posted by Springman at 12:49 PM No comments:

Save the Clams NOW! 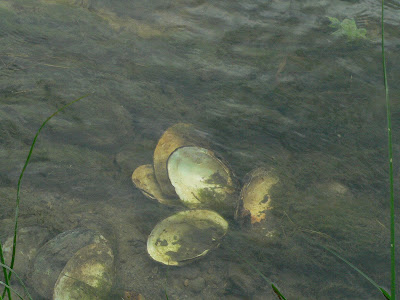 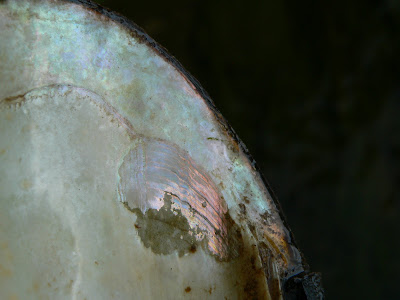 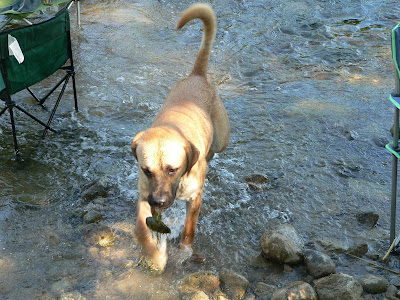 What is that glinting and sparkling under the gurgling current of the Rio Pine? They are giant clams on the half shell! The remnants of clam beds here on the Pine River remind us of the fragility of natures variety of species. Clams are high on Michigan's list of endangered creatures so much so that it is illegal to collect living specimens or even the shells of the deceased. In the Ohio river back in the 1850's a large pearl was discovered in a freshwater clam sparking the great Ohio pearl rush. It is reported that hundreds of thousands of live clams were destroyed in the fruitless search for pearls. In turn of the century America local rivers were scoured by clammers to support the multi million dollar button industry pushing our crustacean friends to the verge of extinction. Who wouldn't want fancy mother of pearl buttons adorning their pretty dresses or garish cowboy shirts? It is estimated that over 200 button factories flourished in 1912 gobbling upwards of 600 million clams a year! The providential intervention of no less a product than plastic eventually prevented that clam apocalypse but the fight for clam survival still goes on a hundred years later. Today the threats include pollution and the introduction of exotic species into the ecosystem like Loki, the clam collecting dog, who fortunately scavenges only spent shells. The pets owner is believed to be legally responsible for Loki's inexplicable behavior.
Clams can live a hundred years laying decade after decade in the same stretch of river adding band after band to the outside edge of their shells. Forty and fifty year old shells are commonly found near my home. But where are the young-ins? Like the plot of a science fiction story the elderly clams move toward the final outcome unable to reproduce as the population slowly diminishes. Sad,very sad. Where are the "Save the Clam" tee shirts and bumper stickers? Where is the uproar? Who will filter our water and preserve our river beds while elegantly creating a mother of pearl treasure trove?
I picture natures connectivity like a huge pile of pick up sticks with human kind yanking out stick after stick, each one representing a plant or animal taken out of the mix. Remove one and several fall. Clams are not petable, they won't lick your face when you come home from school or work and love you unconditionally but they are a part of our little world and once gone, the bell will toll, the jokers will laugh it off and the clock will tick one notch closer to midnight.
Posted by Springman at 11:36 AM No comments: