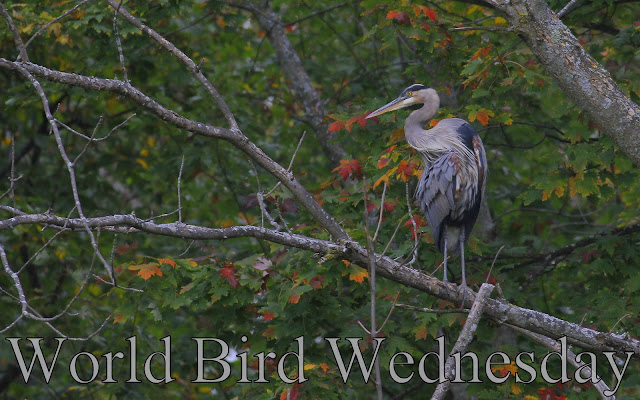 I Love You Just the Way You Are! 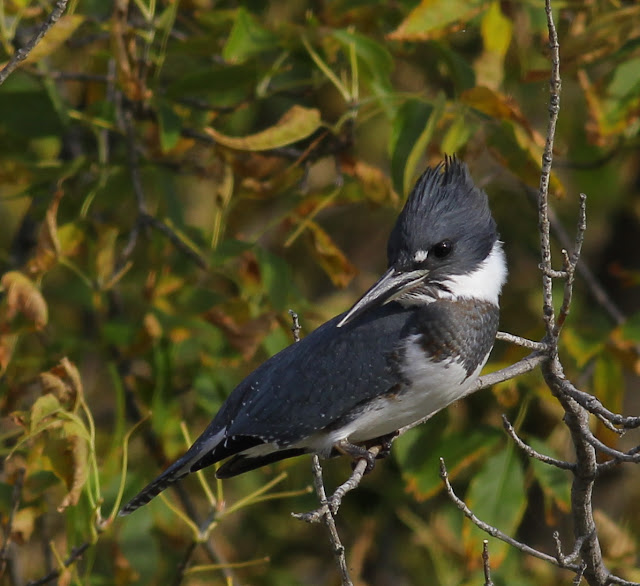 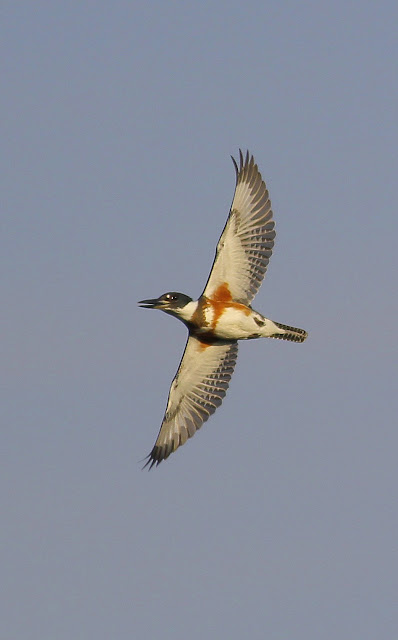 If Hollywood had been in charge of designing the Belted Kingfisher, instead of the haphazard bump and grind of evolutionary tectonics, it would sport talons at least on par with a parakeet or sparrow instead of the little tiny feet it has been stuck with. Where's Intelligent Design when you need it? It's not the first time evolution has made mistakes like this. T-Rex jumps immediately to mind with it's dainty fore-limbs to stunted to pick it's own teeth or scratch the back of it's considerable head. Check Godzilla for a sensible T-Rex redo.
Of course, small feet are considered very desirable by the Geisha's of Japan to the point where they intentionally crunch their toes into ill fitting slippers rather than suffer the stigma of unfashionably out sized clodhoppers. A Geisha would think the kingfishers feet perfectly in proportion to it's size. I would agree to disagree. Besides, the fierce nature of the kingfisher is more in line with a Samaria warrior than a refined lady of culture.
The Belted kingfisher's blazing airborne attacks, carried out with a acrobatic deftness, defy anything fabricated in Hollywood's computer generated action movies. Indeed, a gritty hero crashing headlong into troubled waters, impaling the woeful with a black saber, and flying off to beat the day lights out of it's stunned victim on a rock, could more or less pass for a movie plot these days.

Hitchcock may have had a brutal undertone submerged in his story lines but his implied violence was in context and not the sole point. Sir Alfred reminds me of another of the kingfishers design flaws. Yes, their immense heads. Here's Hollywood's master plan for a more telegenic kingfisher: Shrink the head, enlarge the feet, lengthen the tail feathers, give the eyes a red glare, and chrome the beak! Yeah, that's what we'd see, another doped up Tinseltown remake: Revenge of the Kingfisher! 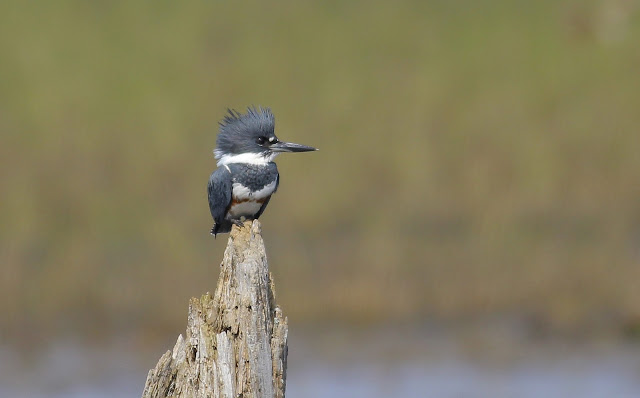 Naturally, I jest. My impertinent discontent can be traced to the research into the Belted kingfisher's clan that I did this week. My knowledge concerning ornithology has holes in it the size of Utah and I dare not write about birds without a back up source more authoritative than my own memory.
So it was that I cast my Enet for factoids about the Belted kingfisher, lesser cousin of the vaunted Kookaburra, greatest of all kingfishers. Imagine my surprise when I stumbled upon an informative article that commented on the ninety different varieties of kingfisher our world has to offer. Was I misinformed? Wasn't there only a single version of the kingfisher in all of Europe, the Common, and one native to North America, the Belted? Not quite, there were a few others, for instance the Ringed and Green kingfishers that reside in the American South West, but those are rare enough to be easily overlooked by the casually educated.
To further hammer down the disparity I then read that only six of the ninety Kingfisher species call the whole of the Western Hemisphere home, while Gambia, an African country of barely 2,400 square miles, claims eight! What an astounding variation in diversity.
One click led to another and I began to find picture after picture of rare kingfishers gorgeously festooned with a dazzling pallet of colorful plumage's. And that is how my drab, slate colored darlings lost some of their visual appeal and made me long for something more...intense. 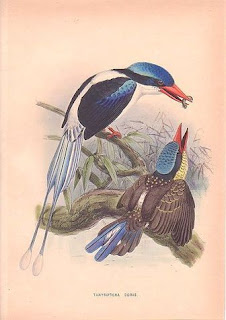 Some species of kingfisher are unbelievably rare and precious. The Kofiau Paradise kingfisher is resident to only one tiny island, Kofiau, off the coast of New Guinea. The tropics of the Eastern Hemisphere spanning Africa, Asia, and Australia are our planets kingfisher treasure trove.
The world over, these peculiar birds share most of the same general attributes. Those that spring to mind are obvious: long beak, tiny feet, and ill proportioned head. The forest dwelling varieties that dine on insects dug from the earth will sport a stouter bill and feet more useful for standing on Terra Firma. There are mountain and desert versions too. Kingfishers are blessed with acute eyesight although they must turn their heads to direct their line of vision to make up for an inability to move their eyes easily in the socket. Kingfishers are creatures of the air and do not presume to walk on the their tootsies except to scuttle into their nesting burrows.
The drawing on the immediate left is that of the Common Paradise Kingfisher. Now this is what I'm talking about, fashion and function married in an eye popping explosion of cinematic proportions. Just for a change Hollywood, try bringing back Astaire and Rodgers, we could use a little snappy dialog and sophistication. I rest my rant. 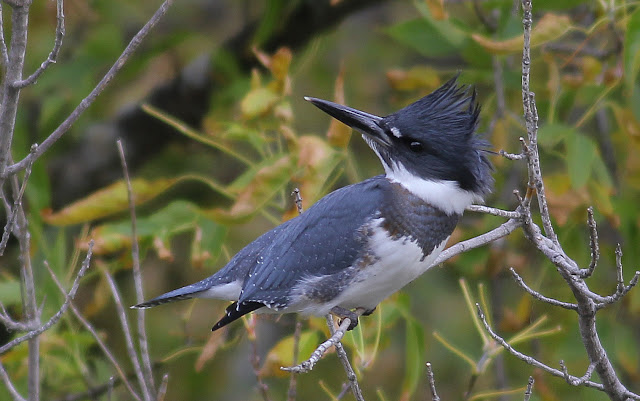 #1. Simply copy the above picture onto your W.B.W. blog entry, it contains a link for your readers to share in the fun. Or, you can copy this link on to your blog page to share WBW. http://pineriverreview.blogspot.com/
#2. Come to The Pine River Review on Tuesday Noon EST North America through Wednesday midnight and submit your blog entry with Linky.

The idea of a meme is that you will visit each others blogs and perhaps leave a comment to encourage your compadres!
Come on it's your turn!