Oh poor Starling! No one likes you very much. It is said you destroy crops and are responsible for the decline of our beloved native song birds like the the pretty Blue Bird. Such are the charges brought against you!
﻿﻿﻿
﻿﻿﻿Your entry into North America was based on a chance turn of phrase from Shakespeare's Henry IV. From 50 pairs released in 1890-91 in the Central Park of New York City by the American Acclimatization Society, who's mission it was to introduce every bird ever mentioned in the legacy of Sir William Shakespeare to the United States, an estimated 200 million Starlings are now living in and enjoying North America. In all his plays, Shakespeare mentions around 600 birds but the Starling only once.   “The king forbade my tongue to speak of Mortimer. But I will find him when he is asleep, and in his ear I’ll holler ‘Mortimer!’ Nay I’ll have a starling shall be taught to speak nothing but Mortimer, and give it to him to keep his anger still in motion." There you have it. The Starlings ability to mimic sounds, even human speech, led Sir William to use the bird as a devise to drive his antihero bonkers. Observed here, in the early winter sunrise, with fresh white tipped feathers, the ends of which will wear off by next summer, one also notes its otherworldly iridescence. Most of the year the Starlings blunt, compact body is dark brown in most light and butt ugly to most human observers. The perceived wisdom that the European Starlings have crossed this continent and displaced native song birds, mimicking their human European counterparts progression across the same land displacing Aboriginal peoples, is now called into some question. Could human related factors such as the loss of habitat and habitat fragmentation actually be the cause of song bird decline and not the Starlings habit of hogging nesting sites? And even as huge flocks descend on crops, are they actually acting as a control on harmful insects and not foraging? I admit such questions are beyond my intellect and the debate rages among wiser observers but I think the questions are worth a fresh look. Please check out http://www.starlingcentral.net/badrap.htm for the in depth defense of this much maligned ugly European! 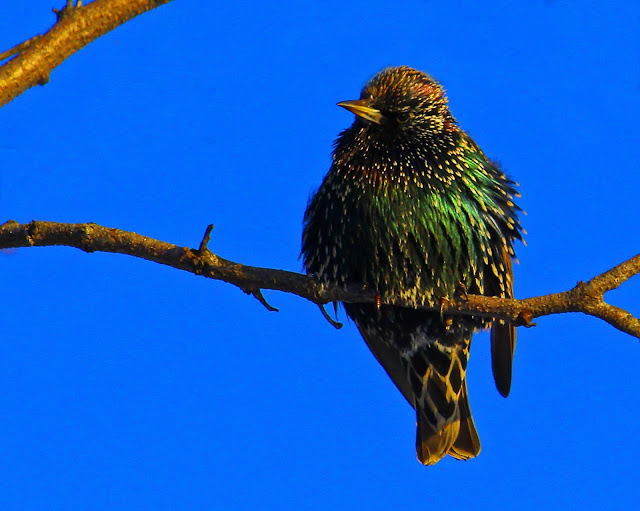 "He has all of the virtues I dislike and none of the vices I admire."
Sir Winston Churchill


You are invited to link your blog with other bird photographers in a weekly celebration of these most diverse and beautiful of Earth's residents, the BIRDS!


#1. Simply copy the above picture onto your W.B.W. blog entry. It contains a link for your readers to share in WBW. Or you can copy this link on to your blog page to share W.B.W. http://pineriverreview.blogspot.com/

#2. Come to The Pine River Review on Tuesday Noon EST through Thursday Noon and submit your blog entry with Linky.


The thumbnails below are links to our contributors blogs where you can view their beautiful posts. The idea of a meme is that you will visit each others blogs and perhaps leave a comment to encourage your compadres.

Come on it's your turn!