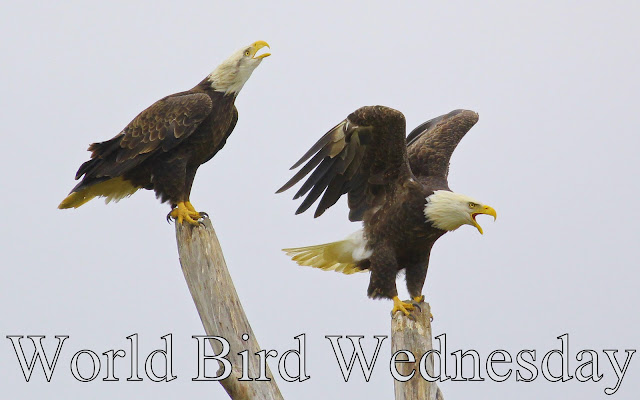 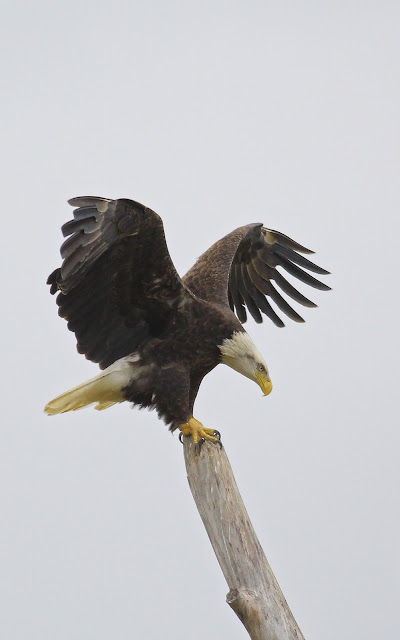 ﻿I was encouraged by "those in the know" to visit three Warbler hot-spots last week. The migration, according to Saginaw Bay Birding, is in full swing and the tantalizing lists of warbler species recently sighted by reputable birders are lengthy. My mind was full of a fervent ambition to scramble though the thickets, click away at a wide variety of warblers, I.D.ing them in the field guide, and joyously adding bird after bird to my life list. So why, you might ask, are there eagle pictures on my WBW post? In this weeks considerable wanderings I saw only one bird that even remotely resembled the hotly expected warblers and it fluttered away long before I could raise camera to eye. Is it any wonder then, my imagination boiling with anticipation, that when I first observed these eagles through a long and murky distance I mistook them for white headed warblers? Had I been correct it would have caused delirium in the birding world since out of the 119 species there is no such thing as a White-headed warbler. I thought I had number 120. Never one to let the facts get in the way of a good story, (my children will confirm my favorite dinosaur as the Thesaurus,) I did not feel confident in perpetuating a hoax. However; I wasn't altogether disappointed when I expertly deduced I had Bald eagles in my sights especially when, through the alabaster skies, a second bird joined the first.﻿ 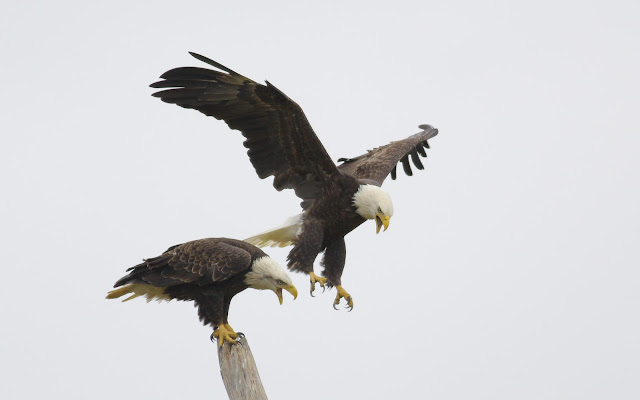 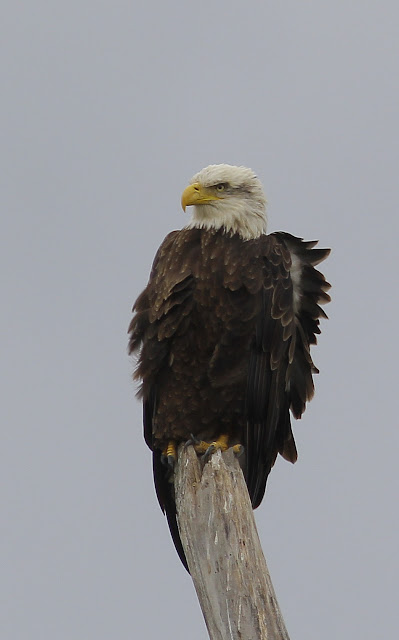 These eagles were waiting for me at the entrance to the Shiawassee Wildlife Refuge. I stayed far away until my camera was primed for shooting a bird in the cloudy light. Is the light ever right? Isn't it always to cloudy or to sunny? In the year since owning a Dslr I've complained way to much about the trials and tribulations of natural lighting. Maturity is coming and rather than thinking about the deficits of difficult conditions I am trying to maximise the advantages. The challenge with these eagles was primarily not blowing the opportunity, to get something. We expect the pounding heart beat and the manic twisting of lenses, knobs and dials but there is no picture if in your enthusiasm you scare away the object of your desire! I rolled up very slowly and smoothly in my little car making my way to a point about 150 feet away from the dead tree the first eagle was perched on. I slipped my tripod out the car window and set the camera on it. Stupid me, the remote shutter release was in the trunk and might just as well have been on the moon as I could not risk getting out of the car. The work around was to put the camera shutter on a two second delay to insure the camera was rock steady when pictures were taken. Great! The bird was calm and in a few minutes the jumble of ISO, shutter speed, and F stop came together to produce detailed pictures of the stationary eagle. Just then I heard a ruckus and the second eagle swooped in. Though I managed some pictures they were horribly blurred because my camera was honed for a still setting. The eagles settled on the two stumps and I was back in business again. There was a little hole in the cloud cover I prayed would cast some bright light on the the scene but it never materialised. At the entrance to the refuge a car pulled up and I knew would have to share this blissful scene. I was pretty sure the birds would take flight so I quickly bumped my shutter speed up to 1/2000, the ISO to 800, and the F stop down to it's lowest setting of 5.6 and fired off a couple test shots. I held my breath as the car drove up. The birds flustered and one rose off its perch. Their cries pierced the air. It was a magnificent experience photography aside. Even better when you can share the moment! 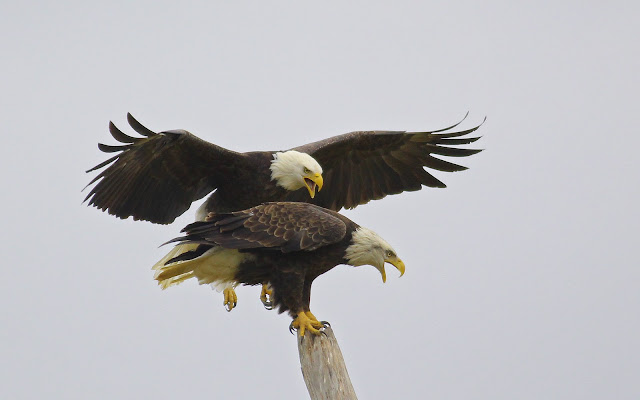 The idea of a meme is that you will visit each others blogs and perhaps leave a comment to encourage your compadres!
Come on it's your turn!
Posted by Springman at 10:30 AM