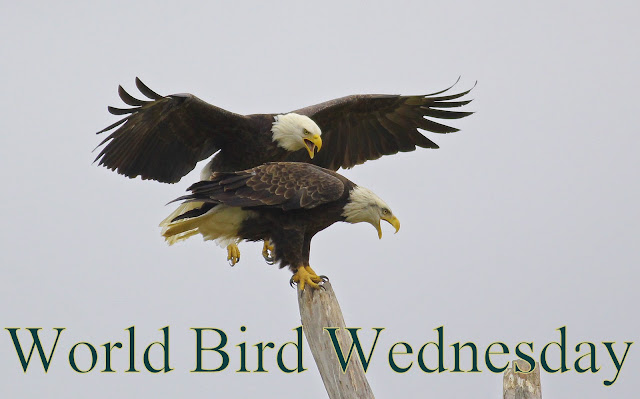 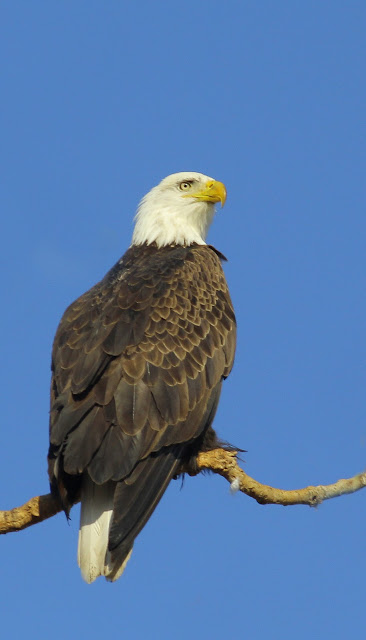 I wrote last WBW about how Mid-Michigan is inundated with eagles and as if to prove a point, scattered over this page you'll find five different Bald eagles. A flock of eagles is called a convocation, a word normally used to describe an assemblage of learned people summoned together to decree honors and privileges. The word has a ayre of religiosity and academic stuffiness to it. Grant it, Bald eagles in their various phases are grand birds and never fail to grasp your full attention with their noble presence. Still, I think our ornithological forefathers missed it on this one, instead of convocation, I might have suggested a Rumble of Eagles. Something with a bit of rough and tumble 1950's violence associated with it and rolling thunder to boot. All in all the standard terms are quite imaginative. I don't think your going to top a Murder of crows no mater what you come up with. A parliament of owls would be a tough one to beat too. When a nye of pheasants are flushed it is called a bouquet. They got it right when they named a flock of larks an exaltation. A siege of herons sounds like something a fisherman came up with. You must admit, a charm of finches is a little to cutesy-pie. A muster of storks seems perfect though I couldn't tell you why, and I wish someone could explain the expression, an unkindness of ravens! There is so much here to ponder...
...and then, the question begs to be asked, what should a group of bird watchers be called? The English term Twitchers jumps to mind, a sixty year old expression describing the nervous demeanor of the high strung, obsessive, and ostentatiously learned UK birder of that era, Howard Medhurst. So would that make it, a twitch of birders?  A classic of course but could we do better?
Surely we, the bird photographers of today, deserve a descriptive word to better describe our own peculiar quirks when time and chance permits us to indulge in our own herd mentality. 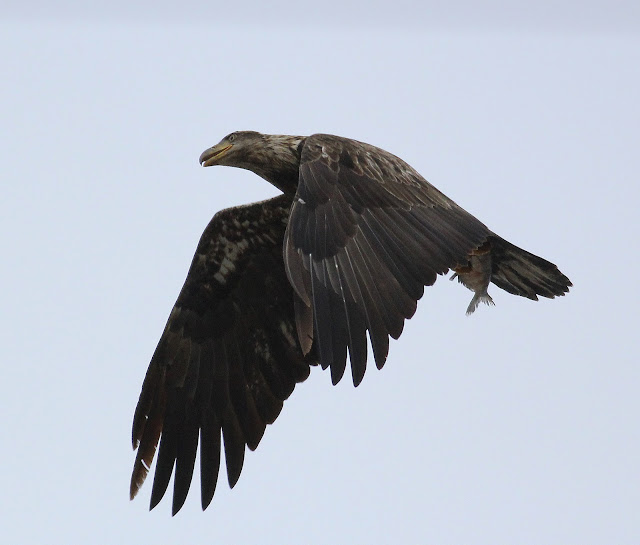 This happy under aged Baldy with a tattered fish in his talons was fleeing a convocation of four older eagles!  ﻿ 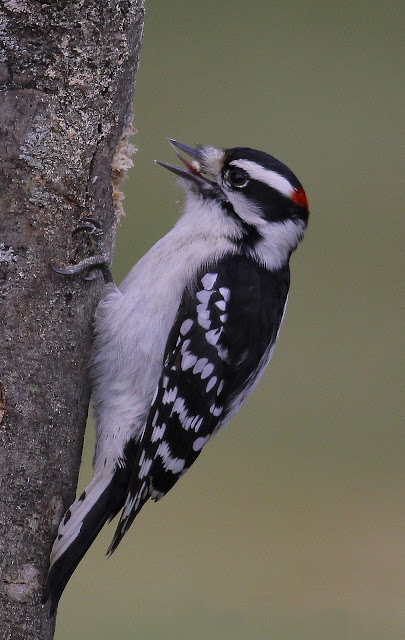 After giving it some serious thought my best suggestion would be a clique of bird photographers. Get it? A clique is a group of extremely cool people...check. And our camera's click more then a roomful of beatniks at a poetry reading. This is really to much fun and the opportunities to establish new lexiconic frontiers is exciting. I like it that these inventions barely make sense in conventional terms but relies more on a form of free associative logic. That is right up my alley. Would a cluster of dietitians be a glut or a crowd of firemen a splash?  The little Downy woodpecker to your right, in concert with others of it's kind, is properly called a descent. I would rename it a poke. We can be proud that birders invented this tradition of giving distinct and picturesque names to its flocks. There is plenty of room here for the rest of non-birding humanity to join in and create these snappy little catchalls though maybe we should keep this spirited word game to ourselves, you know how a good free thinking idea like this gets turned on it's head and takes on a vindictive tone by a boil of mean spirited bullies. Slurs, as we're all to aware, are the currency of jerks! Word up. 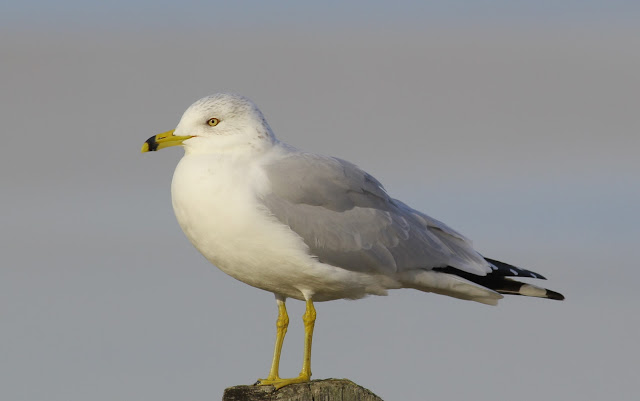 Be at peace, it is still a flock of seagulls. In this case though, a lonely Ring-bill.
P.S.
On a bright note; two new countries visited World Bird Wednesday for the first time last week: Mongolia and Fiji. Awesome!

#3. Check back in during the course of the next day and explore these excellent photoblogs!
The idea of a meme is that you will visit each others blogs and perhaps leave a comment to encourage your compatriots!
Come on it's your turn!