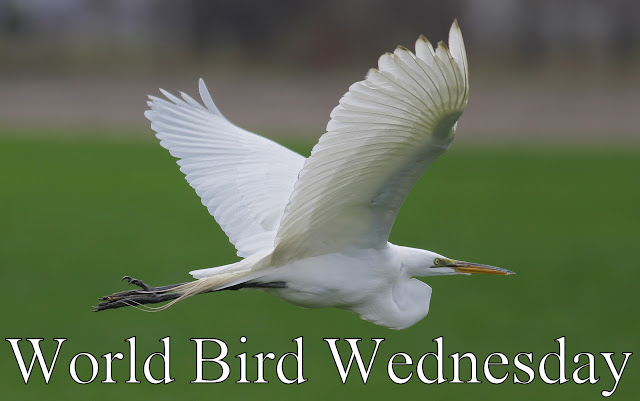 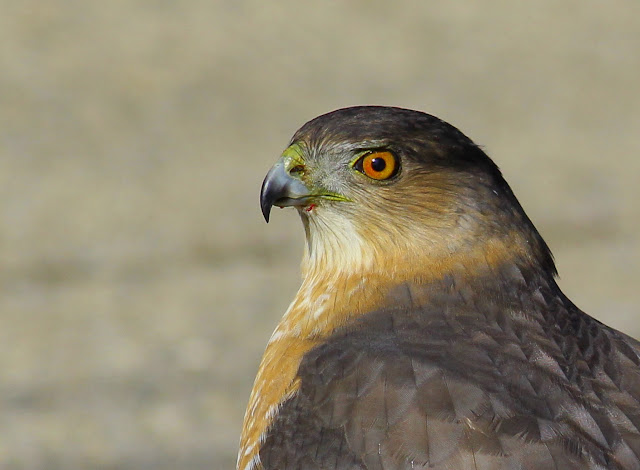 Part of my routine when I drive anywhere is to lay my camera next to me on the front seat dialed in and ready to catch a glimpse of the roadside hawks I see plying their trade along the way. It is fortunate I have two eyes, one to watch the road and the other to scan the treeline for a well lit bird to grace these pages with. The Red-tailed hawks that sit perched like sentinels along the motorway are wary of a car pulling off to the side of the road and except for a few blessed occasions take to wing long before a good shot can be set up. These birds are wild animals and live by harsher rules then civilized man. Frustration becomes a bird photographers faithful friend.
Having a pillow to lay on the window ledge to support the long lens in a rock solid cradle is a must. Then it's just a matter of checking the light, focusing and clicking away. Most of these are thirty second opportunities at best. If you can organise your approach to accommodate this time frame every now and then you'll strike gold. Even if the bird flies early I'll at least take one good picture of where he was, just to have had the experience of completing the cycle of events. So much the better when the bird stays posed!
Lately, my rough camera set up would go something like this: Canon T2i shooting in jpeg format. 400mm 5.6 prime lens set at 7.1. ISO @400 even on a fairly sunny day. Shutter speed? Just as fast as I can get it, the bare minimum at 1/400 and starting to feel much better at 1/1600 since my lens is not image stabilized. This is my starting point and I adjust from there.

Today I was leaving Detroit, fleeing the fire scene, bound for the Rio Pine and anticipating the Red-tails I would naturally see. Buzzing through an east side neighborhood in my little red five speed I down shifted to nod my respects to a stop sign and there it was, sitting on it's bloody kill, a prime Coopers hawk not fifty feet away. 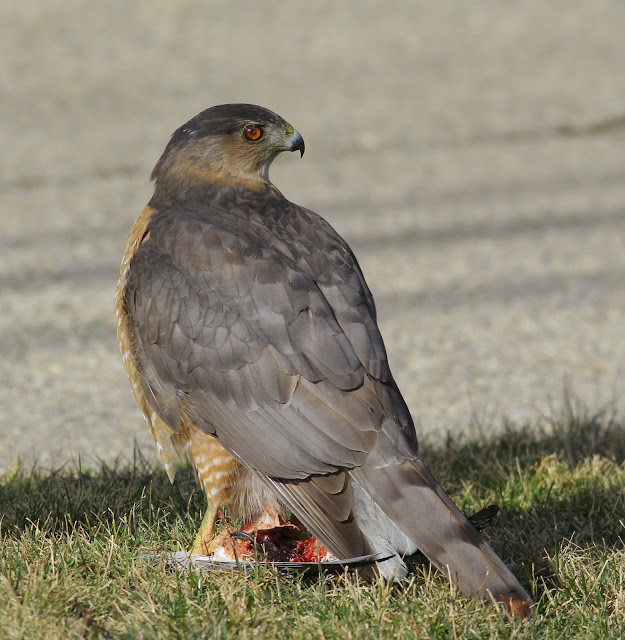 The Coopers hawk (Accipiter cooperii)  is perhaps the most profoundly gifted killer of other birds that Michigan's skies have to offer. Picture yourself an early 20th century poultry farmer matching wits with this hawk and it's taste for young hens.
From Familiar Birds we quote the accounts of  Mr. Forbush in 1927 who mentions the experience of a Mr. Farley:

This Sunday morning, May 2, 1909, soon after 9 (apparently his usual hour), the Cooper's Hawk (or another just as bad) which is getting so many chickens from poultry-raisers here on Chiltonville Hill, Plymouth (we have lost 25), appeared, coming for the coops. Mr. Graves fired at him, but the hawk, not stopped by the report, circled within a few rods and came in again. But the second barrel sent him away, apparently hit. During this entire episode there were five people standing close to the coop. A few mornings ago also, as Mr. Graves was pounding away making another coop, the hawk caught and carried off a chicken within a few yards of him. A Cooper's Hawk two years ago in East Bridgewater behaved similarly. Four times this daring bird (with people standing near) tried to get a chicken out of a hen-yard that adjoined the mixed woods where it had its nest. The people "shooed" the hawk away three times, but at the fourth attempt, despite their cries, it carried off a pullet. 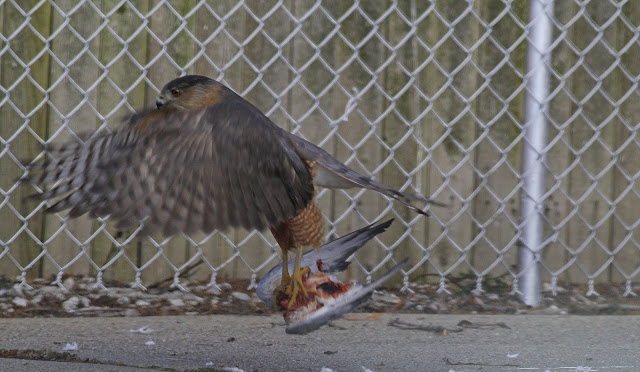 Here in 2012 my Coopers was just as non-pulsed by my presence as theirs was in 1909. The shoot lasted just a hair under two and one half minutes. Not bad considering it was a narrow and busy stretch of road. When the sun broke out I went from 1/500th second shutter speed as in the above picture to 1/1600th and we were cookin'!
It is difficult to make the call, is this a Coopers hawk or a nearly identical Sharp shinned hawk? I wavered on my decision. The white terminal band on the rounded tail feathers, a more clearly defined black cap, and sturdier legs gave me confidence to decide in favour of the Coopers. Both share a reputation as the bane of song birds charging headlong through a tangle of branches to capture their prey. At the end of a successful chase the plucking of feathers is followed by a leisurely if gruesome meal. 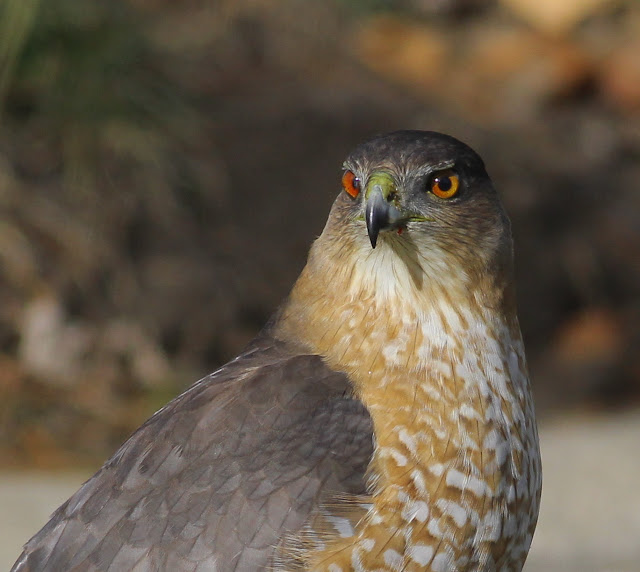 Two first time countries visited World Bird Wednesday last week: Bolivia and the Netherlands Antilles. Welcome!
Thanks to all who leave their kind comments on my pages and those of all the contributers to WBW. It is a great honor to have your attention and company in these busy weeks.
I received a nice E-mail from a reader in N. America asking why World Bird Wednesday starts noonish Tuesday. That's easy to explain. Tuesday noon in the Great Lakes region of N.A. is already 4:00 AM Wednesday Perth, AU. If you think about it, the people of earth (the only ones who care about stuff like this ) experience their Wednesdays over a 48 hour period!
One of the joys of WBW is to see our planet more clearly as a whole enity with birds as our primary teachers. I love to see the wide world through your eyes and to share in turn what I am seeing. Carry on!
Cheers, Dave 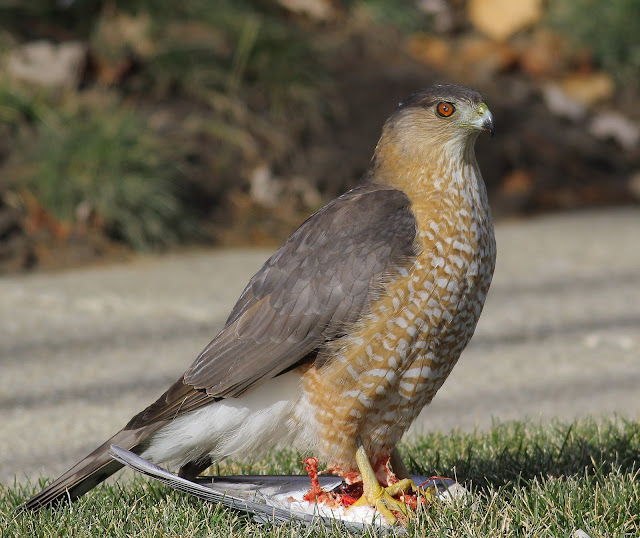 
#3. Check back in during the course of the next day and explore these excellent photoblogs!

The idea of a meme is that you will visit each others blogs and perhaps leave a comment to encourage your compatriots!