I have "discovered" a rolling rural area isolated in the "Middle of the Mitten Michigan" that has somehow sidestepped the passage of the decades and is its own mysterious inner kingdom. To travel here is to be transported to the family farm dominated rural world of a century ago. It is a landscape dotted with strange field stone homes and barns built with the granite rocks gathered by the first European farmers who turned the soil here after the peninsula was cleared of its magnificent white pine forests around a hundred and twenty five years ago. Many of these large farms remain in the hands of later day family members. This odd timeless feeling is further fostered by the Amish population who pursue their peaceful path tilling the earth with 19th century implements and traveling its roads by horse and buggy. Before the taming of electricity and the mass marketing of a homogeneous consumer culture, a way of life that most of us have bought into one hamburger at a time, America was a quirky patchwork of distinct regions that birthed there own local music, accents, cuisine and customs. This is such a place. These lands are centered around the middle branch of the Tobacco River and so we shall call it the Middle River Region. The Middle River still exists because its citizens are quiet, extremely private, and do not seek the favor of outsiders. There are no hotels, tourist associations, nothing on the radar that alerts attention to this quirky realm. It is my desire to look inside this tiny forgotten region and capture some of its light. Over the next several weeks The Pine River Review will delve deeply into its sights, people, and history. Consider this your personal invitation to tag along!

And so it begins...
I started off today on the run chasing the light as a photographer must during the winter months. A day with sun is about a once a week occurrence. I had my second cup of coffee in the car driving northwest on M-10 jumping off northward on Lommis road. It doesn't take long then, just past the slow turn we pass a creek flowing clear with winter runoff and suddenly Lommis road turns into Tobacco road and the atmosphere shifts. This is the glacial moraine, the highlands between Lakes Michigan and Huron where the Great Wisconsin Glacier paused 10,000 years ago on its northerly retreat and deposited its stony load of sediments creating an odd and unexpected rolling landscape here in the middle of table flat farmland. I have loaded every camera lens I own in the Chevy along with my Gazetteer, a detailed atlas of the dirt roads that crisscross the countryside. The sun has swung to the south and is reflecting brightly off a fresh layer of soft snow as the first of what will be many of the Middle Rivers signature stone homes comes into view at the top of a rise. This fine home is being lovingly restored starting with a very expensive steel roof.

I was born in Michigan 58 years ago and have been in and out of nearly every nook and cranny of the State. I look Michigan, talk Michigan, and one day, when I die, my Michigan blood will flow no more. So isn't it ironic that I feel like a foreigner here in my own backyard? The local's eyes puzzle over me. I am obvious and out of place. Even wandering down deserted dirt roads I often feel like the mysterious eye is upon me. I try to shake this feeling of being an intruder but I can't. I recall Freud's words,"The paranoid is never entirely mistaken!" 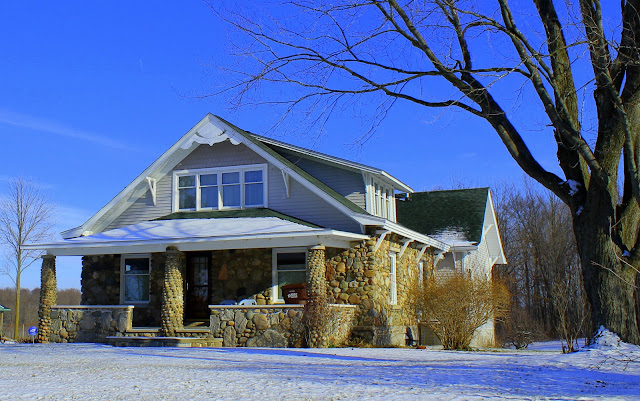 ﻿﻿
In the Middle River Region folk still hang their clothes out to dry on a sunny day even when the temperature is 10 degrees below freezing.


We will continue our exploration of the Middle Region next week!

Check out Bluff Area Daily each Tuesday for Barn Charm.
Posted by Springman at 8:24 PM